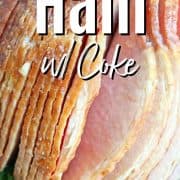 So good you won't believe it! This recipe is low carb and keto-friendly recipe using a sugar-free healthy cola. Recipe for non-ketogenic followers uses real Coke!

I love that this recipe is so simple and easy. To actually cook your ham in the crockpot requires only 3 ingredients. The glaze is an additional step (using stovetop) you can take care of that right before the ham is done, or while it is resting. The glaze has only 4 ingredients. Perfectly easy!

Only a few ingredients and you have the best ham!

Make With Coke and Brown Sugar

For those of you not following a sugar free or ketogenic diet simply replace Zevia cola with Coke or Pepsi, and the Swerve brown sugar with real brown sugar!

Making a fully cooked ham in crockpot is a breeze! It's a fix and forget until it is done so you can go about your business making other yummy recipes!

This low carb ham is keto-friendly, sugar-free, and gluten-free. Make sure to buy a sugar-free ham and use Zevia soda in place of regular soda. Use Swerve brown sugar replacement for the regular brown sugar.

If your ham comes with a glaze packet, just toss it. This recipe makes its own health glaze (that is MUCH) better.

The recipe nutritional analysis is calculated with sugar free cola and a brown sugar substitute.

Spiral Sliced Ham - make sure to pick a ham that fits in your crockpot! If not, don't worry here's another easy ham recipe, Brown Sugar Bourbon Glazed Ham) 😉

Cola - use coca cola, Pepsi, or a sugar free cola you can also use Sprite and even root beer if you want!

Brown Sugar or Substitute - you can use real brown sugar or, for a sugar free and keto alternative use a granulated brown sugar substitute.

Reserved Juices - set aside some of the juices from the crockpot.

🍲 How To Cook Ham in Crockpot

Here are the steps for making ham in your slow cooker - it's super easy!

Spray the slow cooker with nonstick spray or rub with butter. Remove ham from packaging and place sliced side down in the pot.

If your ham comes with a glaze packet, you can toss it. Pour cola and 1 tablespoon bourbon over the top of the ham. Cover and turn the crockpot to low.

Cook until the ham's temperature reaches 140 degrees. Test the temperature after 1-1/2 hours. It took approximately 20 to 25 minutes in my slow cooker, but each slow cooker may be different.

Remove ham from slow cooker, tent with foil and let rest. Reserve 1 cup of juices from the crockpot for the glaze.

How To Make Brown Sugar Glaze

In a saucepan or skillet, melt butter. Add 1 cup the juices from the slow cooker, 1 (or 2) 🙂 tablespoon bourbon, and brown sugar.

Heat to a gentle rolling boil and stir continuously with a whisk until liquid is reduced by half and is slightly thickened.

Tip: be careful not to burn the glaze, or boil at too high a temperature. It can easily burn with butter and brown sugar.

Brush or spoon the glaze evenly all over the ham. Pull apart the slices to help make sure the glaze works its way down into all its nook and crannies. So good!

🥗 How To Serve It

Here are a few ways to serve this slow cooker ham:

Many ham companies recommend serving ham at room temperature. This is my preferred way to serve and eat ham, but many people love it warm and it tastes just as good! Enjoy!

Serve with delicious soft rolls, mayonnaise and mustard, if you have a buffet.

Can I use a different soda in this crockpot ham?

Yes! Root beer, cream soda, or a lemon-lime soda are all great options.

How long can I keep ham?

Ham can be kept for up to 4 days

How do you know if a ham is done?

Check the temperature. It should be 145 degrees F at its thickest part without touching the bone. Remove the ham when it reaches 140 degrees F then tent with foil and let rest until ready to serve.

If you tried this recipe, let me know! I'd love for you to come back and give it a 5-star rating and/or a review in the comments! 🙂 Let's stay connected, so please share photos of your creations with me and others on Instagram, Facebook, and Pinterest! Don't forget to tag #seekinggoodeats 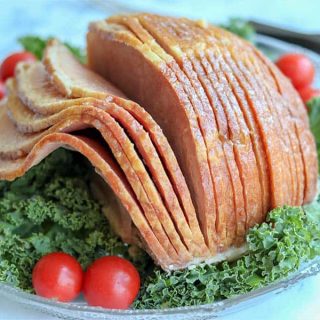 This slow cooker ham with coke is super easy and an amazing holiday roast recipe. This low carb and keto ham recipe is easily adaptable for non-ketogenic dieters. A simple holiday ham roast for your next party. Glazed ham is the perfect holiday recipe for Christmas, Thanksgiving, New Years, Easter, brunches, and any dinner party where an easy main dish that serves a crowd is needed

Hello! I'm Kori and I am a food LOVER. I've had a lifelong passion for cooking and eating (of course)! At some point that catches up with you, right? Older and wiser, I now watch what I eat more closely. What's the hardest and most frustrating part? Finding recipes that are healthy, easy to make, AND taste great.