Low Carb Eggplant Parmesan (Eggplant Gratin), is a tasty casserole loaded with fresh eggplant, melted cheese, garlic, herbs, and marinara sauce. An easy to make baked casserole with the flavors of Southern France and Italy. It doesn't matter whether you call it eggplant parmesan or eggplant gratin! This is a delicious dish that is low carb, keto-friendly, and has no added sugar. Perfect! 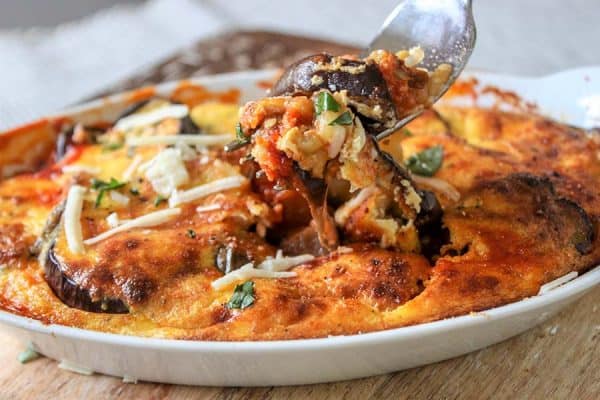 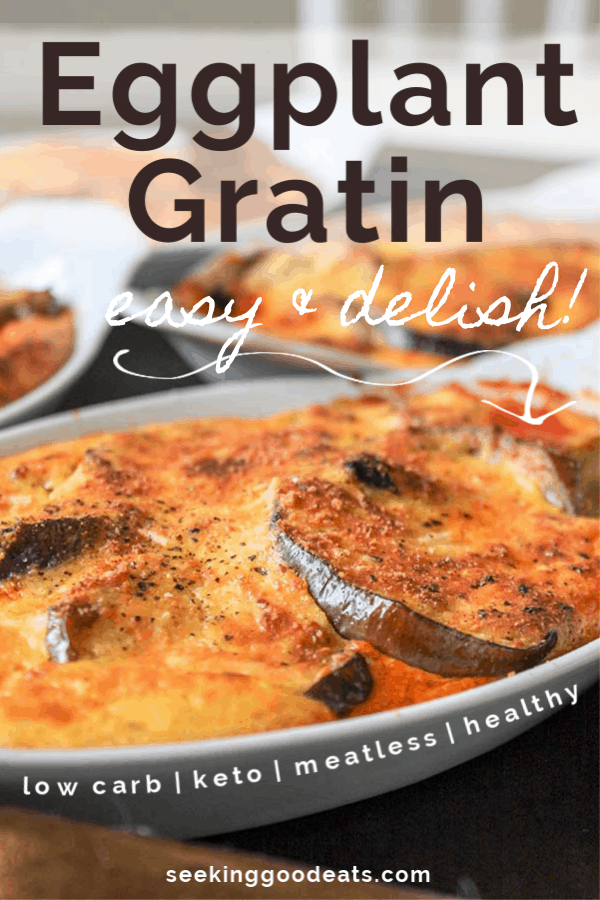 Should You Call It Eggplant Parmesan or Eggplant Gratin?

Eggplant parmesan and eggplant gratin are essentially the same dishes. Eggplant Gratin is the French version and Eggplant Parmesan is Italian.

Eggplant Gratin comes from the south of France which shares not only the Mediterranean with Italy but also their borders. Some areas of Southern France used to be a part of Italy until the late 1800s. Amazingly when you travel to the south of France the architecture looks very Italian. It is only natural that there are also similar variations in cuisine.

Traditionally, the main difference between eggplant parmesan and eggplant gratin is often the cheeses. The French version was often made with a swiss type cheese like Emmenthal, whereas the Italian version uses parmesan and often mozzarella.

Nowadays the lines are blurred on how to make this eggplant casserole. Put your spin on it, and call it what you want! Have fun! 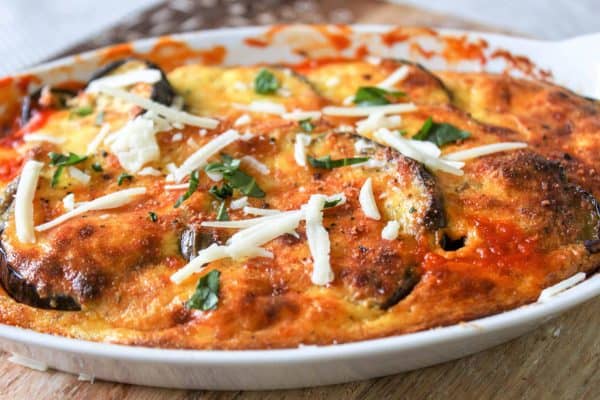 You Will Love Eggplant Parmesan-Keto and Low Carb

This eggplant parmesan recipe is healthy. It is low carb, keto-friendly, gluten-free, and is sugar-free.

While traditional eggplant parmesan is high in carbs, this is a breadless eggplant parmesan making it low carb and gluten-free. Also, the eggplant is baked instead of fried. Sugar-free marina is used in this dish, so there is no added sugar.

The eggs, cream, and cheeses elevate the fat to where it is a perfect keto recipe. A full nutritional analysis is included with the recipe below.

This eggplant parmesan recipe tastes SO GOOD and is easy to make.

What is unique to this recipe is that it is a breadless eggplant parmesan. The flavors blend so well in this recipe you will never miss the breaded coating!

| It's An Easy Recipe

Eggplant gratin is an easy recipe to make. First, you don't have the step of breading or frying the eggplant - which for whatever reason I've never enjoyed frying anything on the stove cause it's messy and time-consuming. Instead, the eggplant is tossed with olive oil then baked in the oven - super simple.

You can be doing other things while the eggplant bakes! Love that.

| Easy to Make - But Looks Impressive

Making eggplant gratin in an individual casserole dishes is a really fun way to serve this casserole! Even though it tastes the same, I get more 'oohs and ahhs' when I serve this dish in individual gratin dishes. Maybe it makes everyone feel special, or it's unexpected, looks impressive, or it is indeed more fun cause you don't have to share it? Who knows. 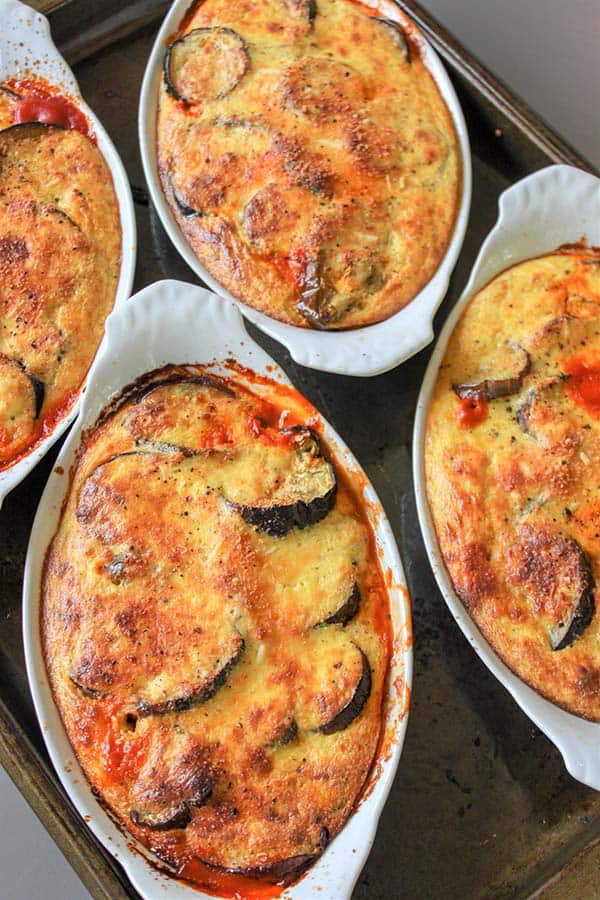 There's no meat in this eggplant parmesan! It's the perfect Meatless Monday meal! It's nice to take a break from meat every once in a while, it's also cheaper! If your eggplant is coming out of your garden in droves (like mine is) it's an even cheaper meal. Yay!

Low Carb Eggplant Parmesan (Eggplant Gratin) can be assembled ahead of time and baked when ready. You can also assemble this dish, bake, then take as leftovers for lunches. It easily heats well in the microwave! 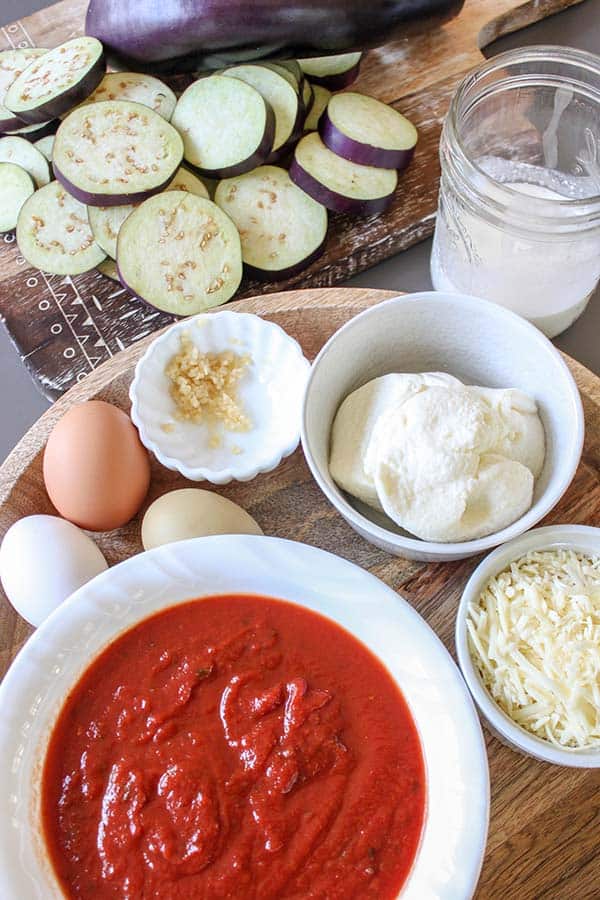 | Is this a French eggplant recipe or Italian?

Anymore, the lines are blurred and you will find French versions the same as the Italian version. The beauty is that you can customize this dish however you want. Change up the herbs, change the cheese, and voila - you have something wonderful!

| What are the carbs in Eggplant Parmesan?

This eggplant parmesan (eggplant gratin) recipe has 10.5g net carbs, but traditional breaded recipes can have significantly higher carbs. It all depends upon the recipe used.

| Can I add meat to Eggplant Gratin?

Yes! You could add 1 lb of cooked meat - Italian sausage, grilled chicken, or ground beef would taste great. Add meat in between eggplant and cheese layers, finishing with cheese.

| Can I make one large casserole instead of individual casseroles?

Yes! Layer roasted eggplant in a 13 x 9 casserole dish instead of individual casseroles. Bake approximately 20 minutes or cheese is bubbly and lightly brown.

| How Can I Lower The Fat Content Of Eggplant Parmesan?

Easy. Use low fat or fat-free half-and-half and low-fat ricotta. You could also toss the eggplant slices with only 1/4 cup of olive oil instead of 1/2 cup, but you'd need to spray your baking sheet with a nonstick spray to keep it from sticking.

Our Most Popular Easy Low Carb and Keto Recipes

In the mood for something international? Here are some of our most popular low carb and keto recipes with an international flavor!

How to Make this Eggplant Parmesan Recipe

Preheat oven to 425 degrees. In a large mixing bowl toss eggplant slices with olive oil and salt and pepper. (Do not let sit. Toss eggplant and oil immediately or the olive oil will soak quickly into the eggplant and not get distributed properly. 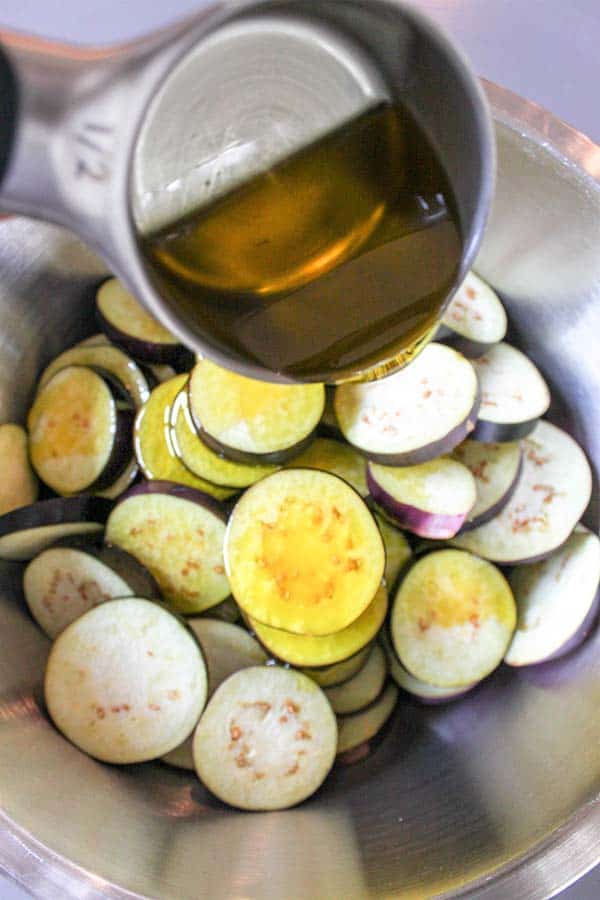 Spread on a baking sheet and bake for 15 minutes. Remove from oven, turn eggplant slices over and then continue to bake until the eggplant is soft another 5 to 10 minutes. 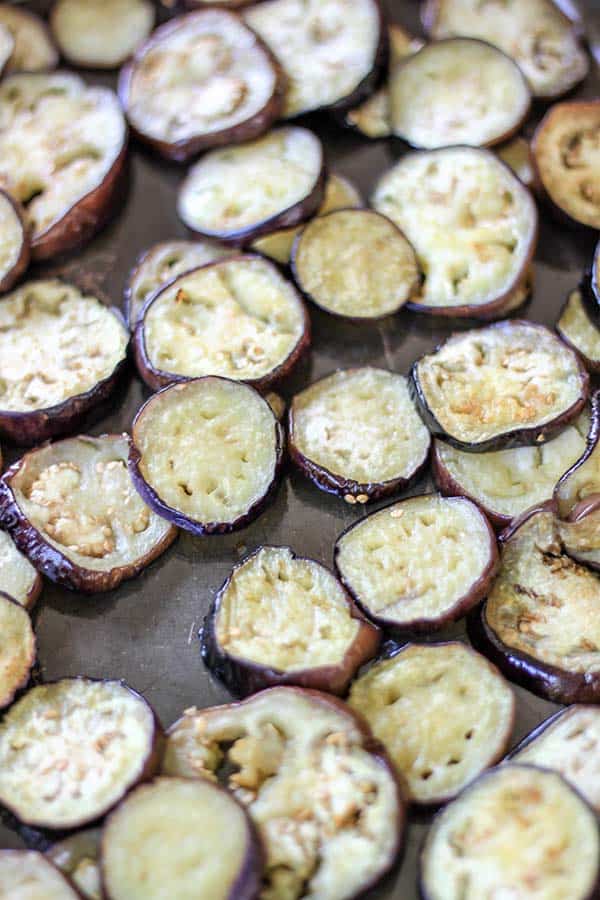 Remove eggplant from oven and set aside.

While eggplant is baking, whisk together half-and-half, ricotta, 1/2 cup of the parmesan cheese, garlic, thyme or basil, and eggs in a bowl until combined. 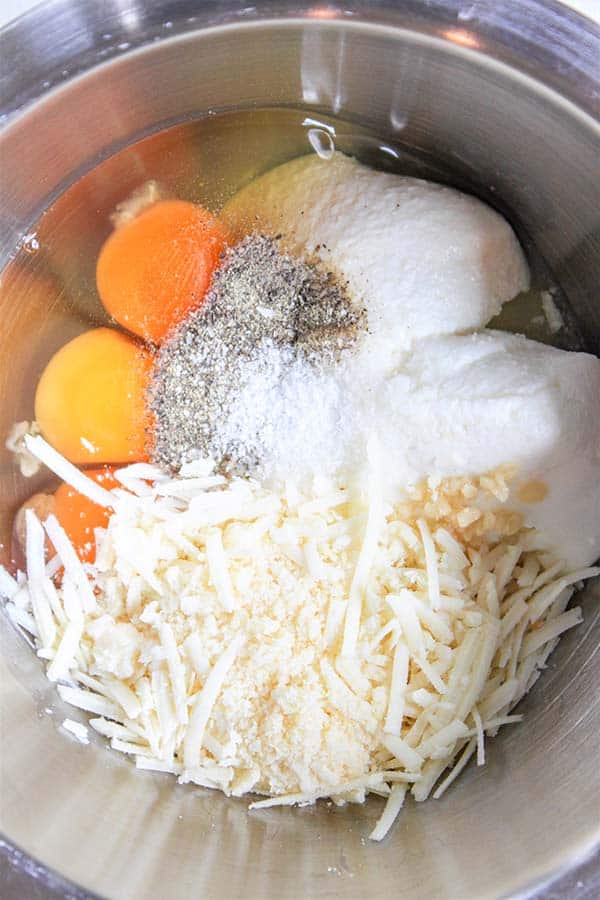 Note that the eggplant will be divided between 6 gratin dishes. (To make it easier on myself I start by separating my eggplant into 6 piles on my baking sheet :-)) I don't do an exact count, only visual piles. LOL

You are creating 2 layers in your dish. Divided between the 6 gratin dishes, start by layering half the eggplant slices, then... 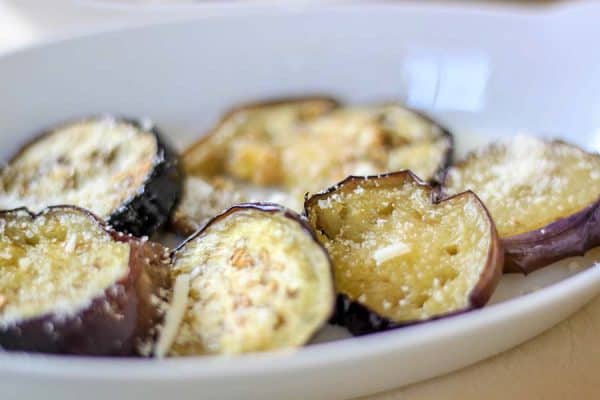 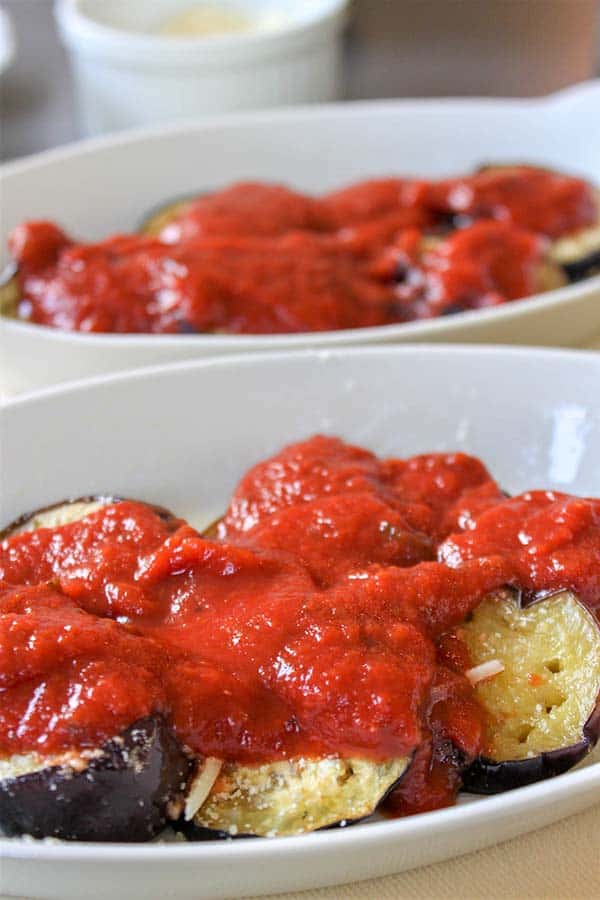 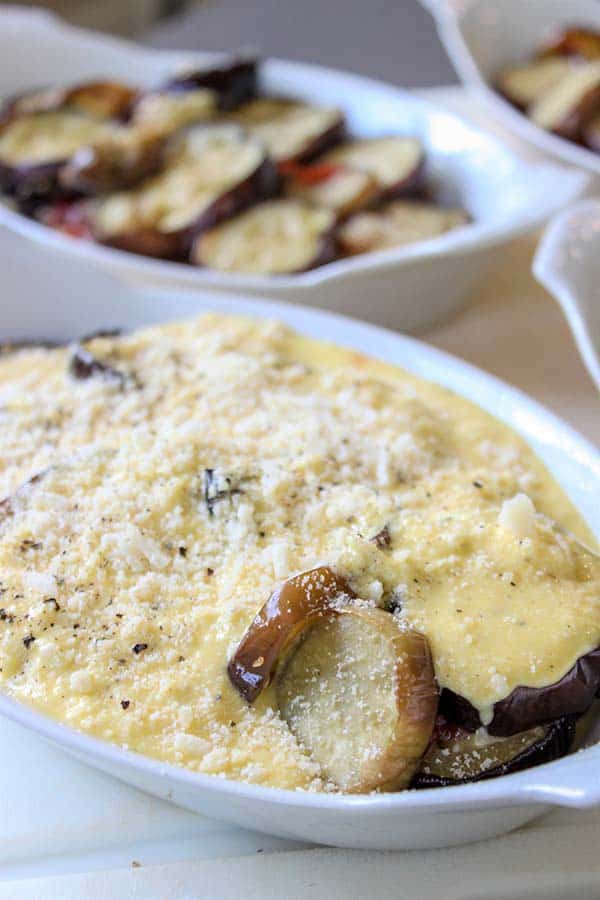 Place on a baking sheet and bake 10 minutes at 425 and then 350 for another 15 minutes, or until cheese is bubbly and lightly brown. 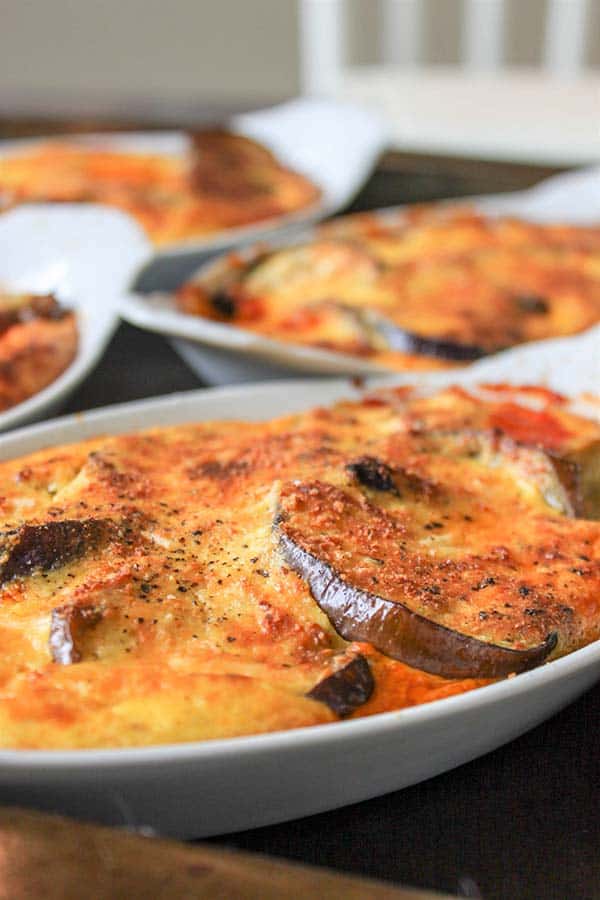 I love to garnish with a sprinkle of fresh herbs and a little extra marinara. Serve and enjoy!

Tip! If you happen to cook this dish a little too long, it's okay (I've done this several times)! Just serve with additional marinara sauce on the side. 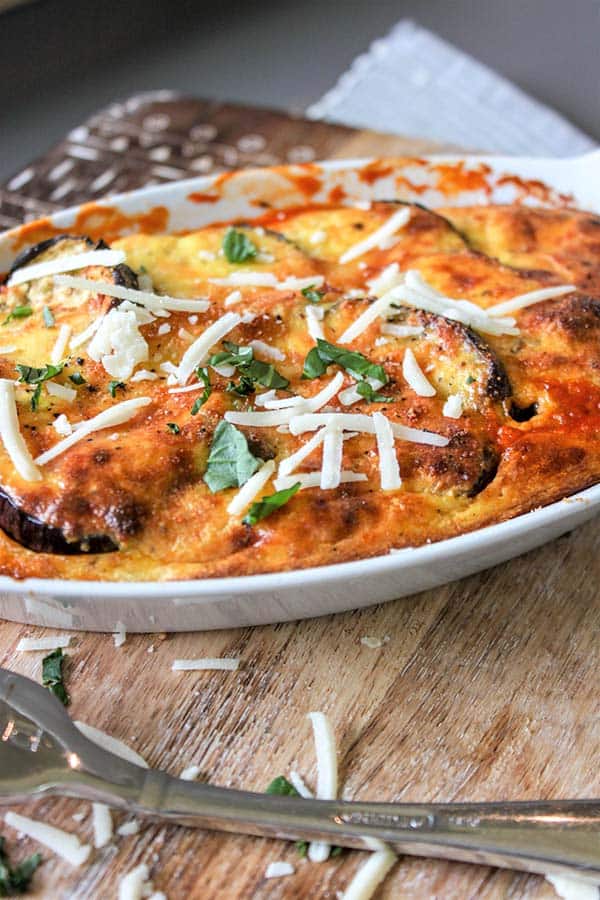 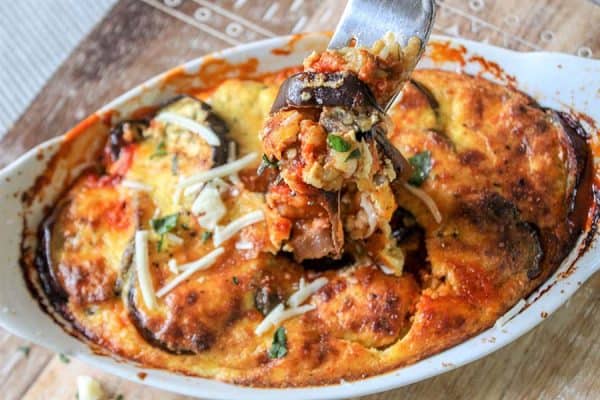 We'd Love To Hear From You!

We'd LOVE for you to help us share this recipe! Here's what you can do to help:

We love reviews! Please leave any questions and comments below and don't forget to review our dish!

Show us what a star chef you are! Take photos of this dish and share them! We'd LOVE to see them!

Upload a photo of this dish to our Pinterest pin

Pin me for later! 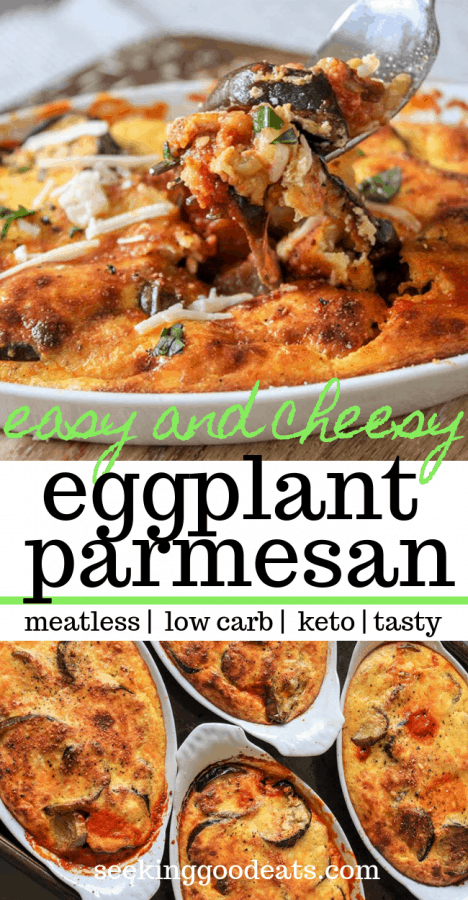 In a large mixing bowl toss eggplant slices with olive oil, salt and pepper. Note that eggplant absorbs the oil quickly. Immediately toss eggplant and oil so that the oil gets distributed evenly.

Spread on a baking sheet and bake for 15 minutes. Remove from oven, turn eggplant slices over and then continue to bake until the eggplant is soft another 5 to 10 minutes.

While eggplant is baking, whisk together half-and-half, ricotta, 1/2 cup of the parmesan cheese, thyme or basil, and eggs in a bowl until combined.

Dividing between the 6 gratin dishes (notes for using 1 large casserole dish below), layer half the eggplant slices, the remaining parmesan cheese, and half of the marinara sauce. Top with the remaining eggplant, then the marinara sauce, and finally pour the ricotta cheese and egg mixture over the top. (approx. 1/3 cup each dish). Finally, sprinkle with mozzarella cheese.

Place on a baking sheet and bake 10 minutes at 425 degrees, then turn oven down to 350 and bake for an additional 15 minutes, or until cheese is bubble lightly browning.

Garnish with a sprinkle of fresh herbs and a side of extra marinara.

To Make One Large Casserole:

You can make this in one large casserole dish if you don't have small ones! Layer roasted eggplant in a 13 x 9 casserole dish instead of individual casseroles. Bake approximately 20 minutes or cheese is bubbly and lightly brown.

Did you make this recipe?

Hello, I'm Kori and I am a foodie at heart. I've had a lifelong passion for cooking and eating (of course)! At some point that catches up with you, right? Older and wiser, I now watch what I eat more closely. What's the hardest and most frustrating part? Finding recipes that are healthy, easy to make, AND taste great.